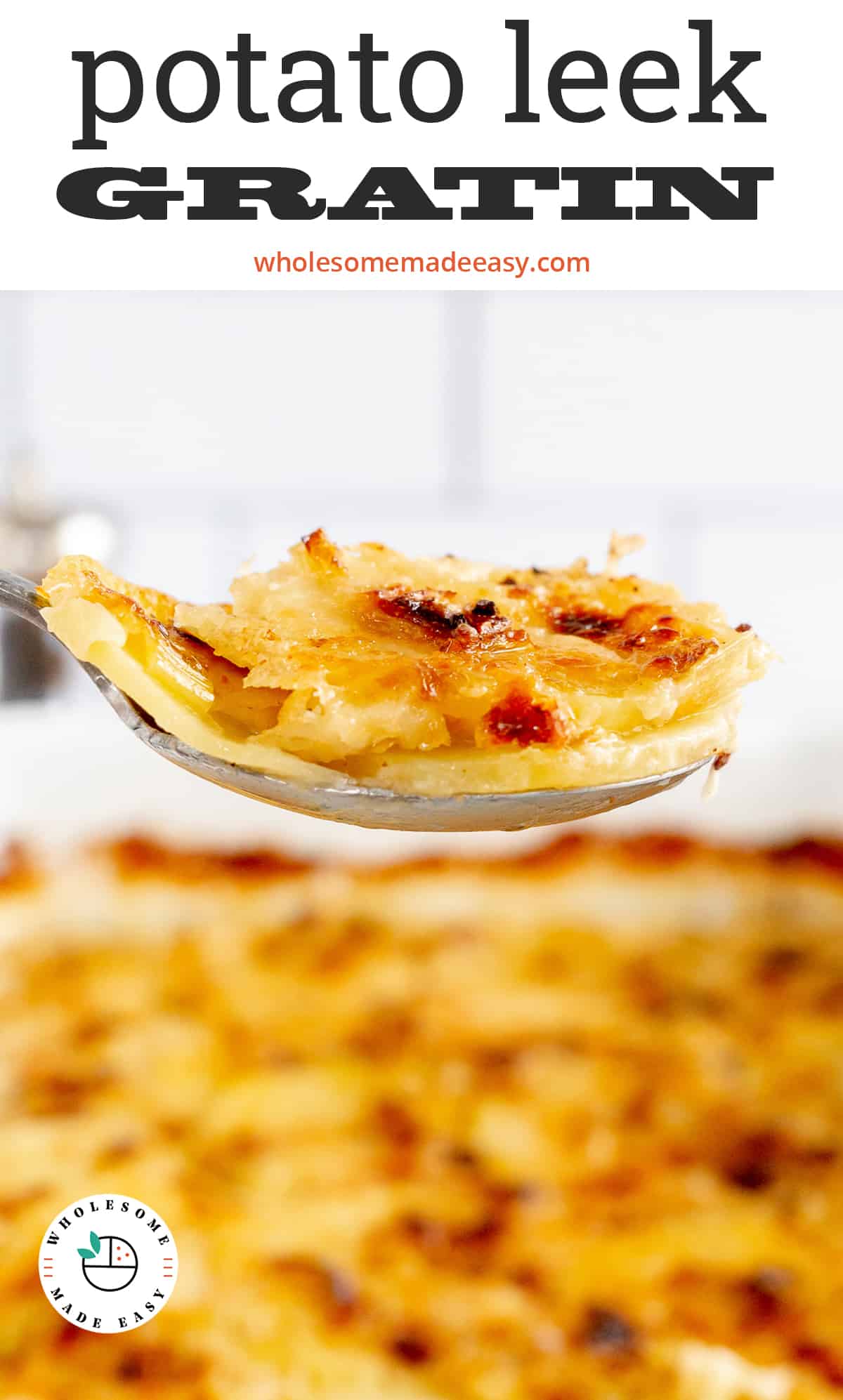 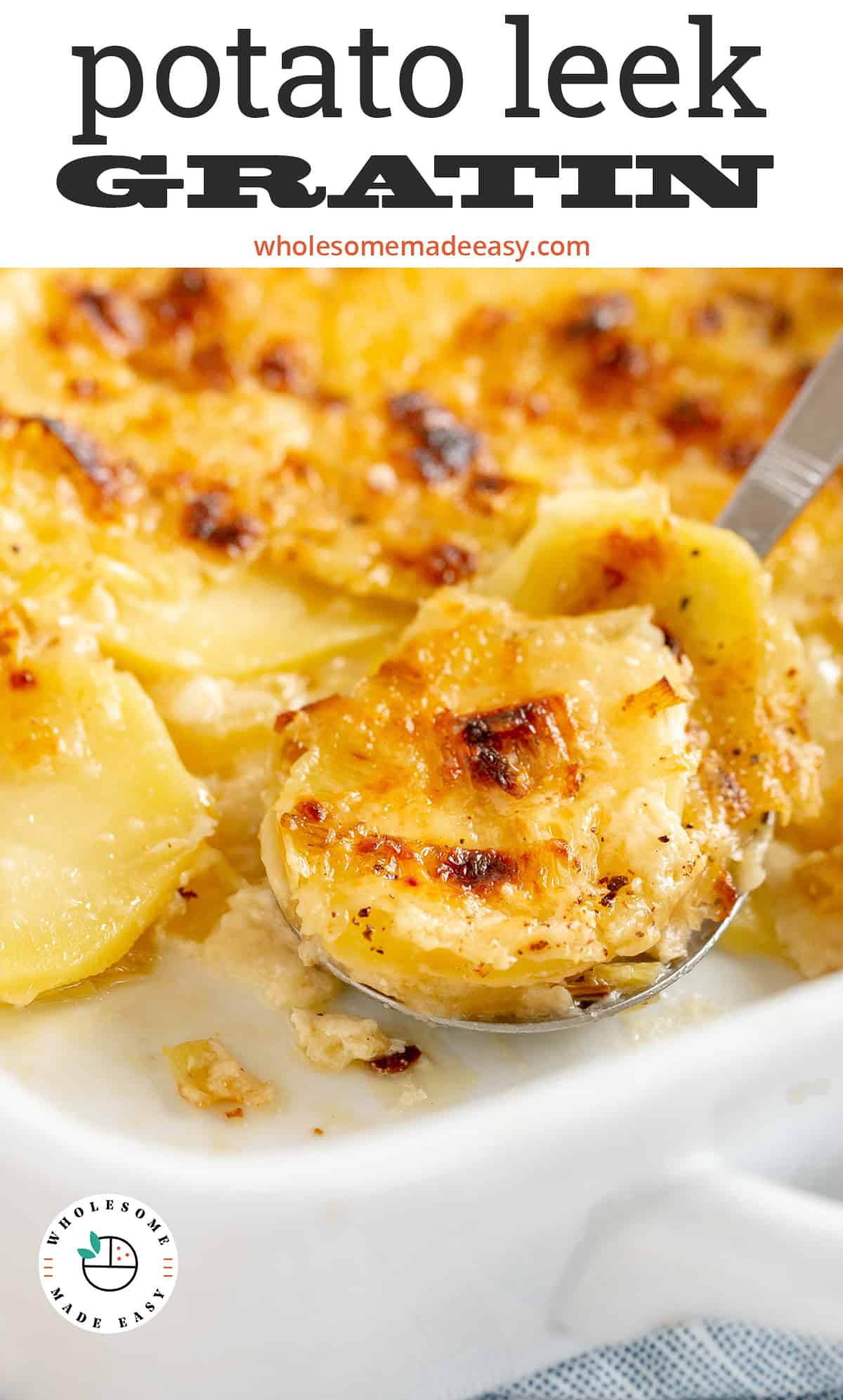 This luscious but lightened up Potato Leek Gratin is a delicious choice for your holiday menu. Whole milk is used in place of heavy cream to create this comforting potato side dish.

You might not instantly think of a potato gratin recipe when trying to plan a lighter holiday menu. But, with some simple modifications, you can create this utterly delicious Potato Leek Gratin that is far lighter than traditional potatoes au gratin. Sliced leeks have a mild onion flavor that intensifies when sautéed and baked into layers of thin sliced potatoes with Gruyère and Parmesan cheese.

This is a recipe that I would put on any menu, whether it was a holiday or any old day of the week, and be absolutely positive it would be well received.

The Best Potatoes to Use

I like Yukon gold potatoes best for any potato casserole including this Potato Leek Gratin. Hands down, no contest. They are creamy and buttery on their own which means you can add less butter and lighter dairy, for example whole milk instead of heavy cream, and still get a luscious result. They have also have a waxier texture than other potatoes and hold together well after baking.

Technically, Gruyere and Parmesan are not considered vegetarian cheeses because they both contain rennet. Look for vegetarian alternatives or substitute Swiss for the Gruyere and a vegetarian, plant-based hard cheese for the Parmesan.

How to Thinly Slice Potatoes

The quickest, easiest way to thinly and evenly slice potatoes is with a mandolin. Peel the thin skins before slicing.

Read and follow the manufacturer directions for your mandolin to slice your potatoes about 1/4-inch thick.

If you don’t have a mandolin, you can use your food processor with the slicing blade. For nicely shaped slices, cut the potatoes in half first and place them cut side down against the blade. If neither of these methods work for you a sharp knife and a steady hand will do. Just be sure to slice them as evenly as possible.

How to Slice Leeks

Leeks look like gigantic green onions (aka, scallions) and although they are a classic spring vegetable, you can find them all year round. They have a mild onion flavor and are delicious paired with potatoes. The edible part of the leek is the white and light green part of the long cylinder, between the stem end and dark green leafy section.

How to Clean Leeks

There is no need to wash your whole leek before slicing it. Since the leek is composed of layers, or sheaths of tightly bound leaves, it is necessary to slice it first to be sure you are ridding it of any debris that might of collected inside.

How to Make Potato Leek Gratin

Sprinkle the Potato Leek Gratin with a little freshly ground pepper and let it rest for about 5 minutes before serving.

Potato Leek Gratin is an excellent side dish choice to go along with Maple Glazed Spiral Ham or Dry Brine Turkey.

Can I Make Potato Leek Gratin In Advance?

Once potatoes are sliced they will begin to oxidize and brown if not baked pretty quickly. You can, however, assemble the dish a day in advance if necessary. After assembled, press plastic wrap down on to the surface, smoothing it out to remove as much air as possible and then tightly cover the dish with a second piece of plastic wrap or foil and refrigerate it overnight. Allow the chilled Potato Gratin to rest on the kitchen counter for about 30 minutes before baking to take the chill off. The baking time may need to be increased a little. The top layer of potatoes may brown a bit but it should not be too noticeable after it is baked.

Store leftovers, covered, for up to 3 days in the refrigerator. 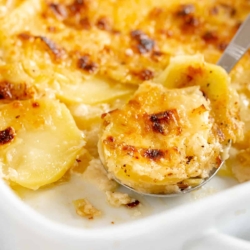 Nutrition information is automatically calculated using generic ingredients, and is an estimate not a guarantee. For more accurate results, please refer to the labels on your ingredients at home. All information provided regarding nutrition on this website is intended to be used for informational purposes only. Content related to nutrition is not medical advice nor is it intended to replace medical advice. The website is not intended to diagnose, prescribe, or treat any disease, condition, illness, or injury. Before beginning any diet program, modifying your diet, or making changes to the diet of a child in your care, including following the nutrition information available on the website, you should seek advice from a licensed professional.

Did You Make This?We love seeing what you’ve made! Tag us on social media at @wholesomemadeeasy for a chance to be featured

Thank you for sharing! 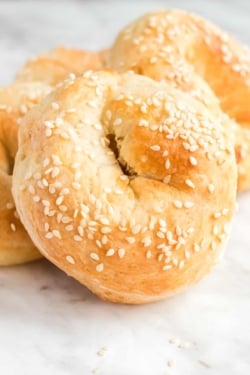 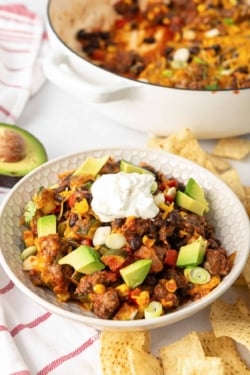 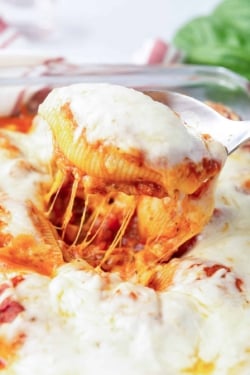 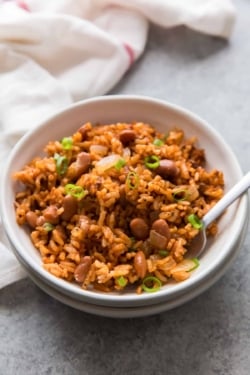 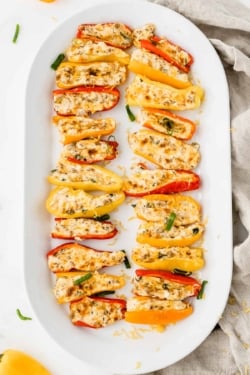 Sign up for our FREE email newsletter to receive the newest recipes + exclusive content available only to email subscribers. 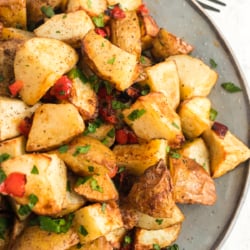 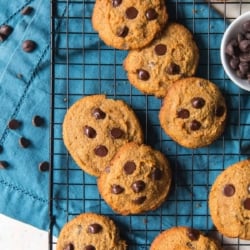 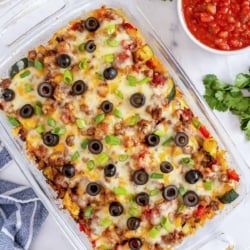 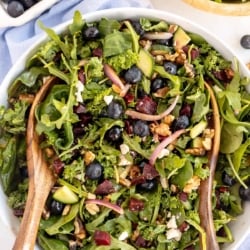 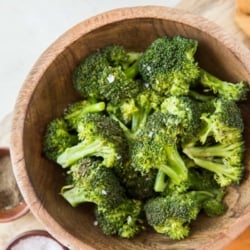 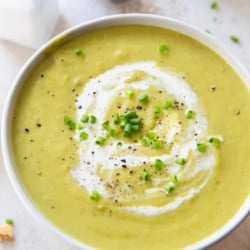 Soups
As Seen On